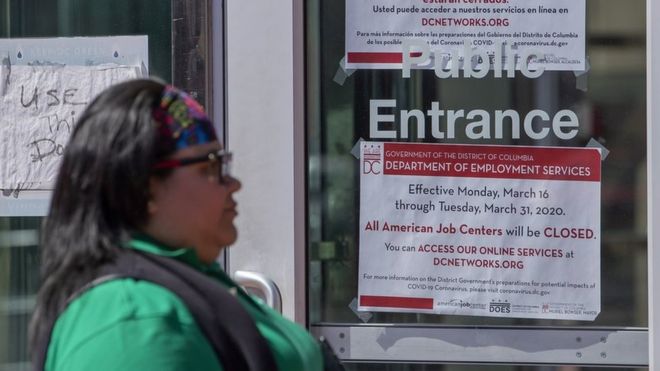 A total of 81% of the global workforce of 3.3 billion people have had their workplace fully or partly closed.

Restrictions on daily life have led to the closure of many companies and the laying off of staff – either permanently or temporarily.

The International Labour Organization (ILO), an agency of the United Nations, has been looking at the global impact with a series of charts.

Their work shows the global scale of the impact of the coronavirus outbreak.

“We have to move fast, decisively, and together. The right, urgent, measures, could make the difference between survival and collapse.”

Nearly 200 million people could end up out of work
The outbreak is expected to wipe out 6.7% of working hours across the world during the second quarter of 2020.

That is the equivalent of 195 million full-time workers losing their jobs.

The worst-hit region is predicted to be the Arab states, with an 8.1% decline in working hours (five million full-time workers).

The ILO says it is “the most severe crisis” since World War Two.

It adds that the eventual increase in global unemployment during the course of 2020 will depend largely on two factors:

How quickly the world economy recovers in the second half of the year
How effectively policy measures will boost the demand for labour
There is a high risk that the end-of-year worldwide unemployment figure will be much higher than an initial ILO projection of 25 million people.

Accommodation services and manufacturing badly hit
Different sectors of the economy have been hit in different ways by the sudden downturn in work.

Not surprisingly, with travel at a minimum and social lives put on hold, the accommodation and food services industries are among those suffering most, along with manufacturing, wholesale and retail, and real estate and business.

Together, they account for nearly 38% of the global workforce, with 1.25 billion people employed in these industries around the world.

Americas and Europe have most high-risk workers
The percentage of people around the world in high-risk jobs varies considerably.

A total of 43.2% of people in the Americas and 42.1% in Europe and Central Asia work in high-risk sectors.

These regions have far fewer informal workers, who make up the majority of the workforce in Africa, the Arab states and Asia and the Pacific.

While these workers play a crucial role in the economy, especially in countries like India, Nigeria and Brazil, they miss out on things like social protection, that other permanent workers have.

A train driver in the Netherlands has been saved by a...