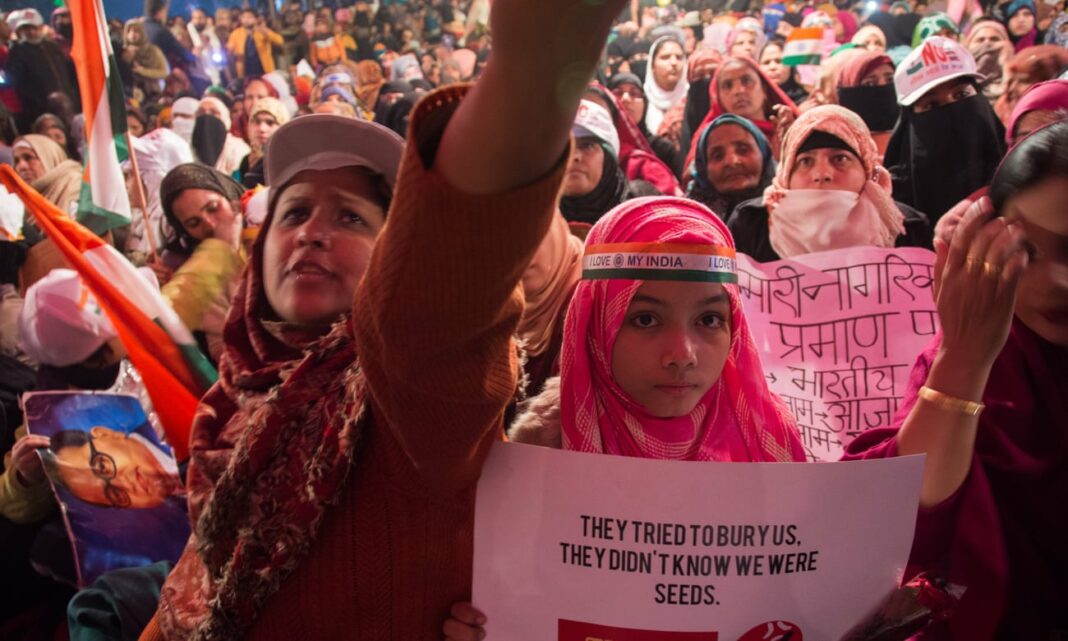 With a toothless grin and a clenched fist raised to the heavens, 90-year-old Asma Khatun chanted exuberantly. “Azadi,” she cried, using the Hindi word for freedom and joining a loud chorus that rang out across Shaheen Bagh, a neighbourhood in South Delhi that over the past few weeks has become a nationwide symbol of resistance.

In her nine decades, Khatun has lived through British colonial rule, the war of independence and India’s bloody partition with Pakistan, but as a housewife she had always stayed behind closed doors and barely brushed with politics. That was until last month.

For over 40 days, the frail but feisty 90-year-old has been camped out on the streets day and night, side by side with hundreds of women and braving Delhi’s coldest temperatures for more than a century. “I am old, my bones hurt in the cold and my children are very worried about my health, but I am sitting here because I will not stand by as Mr Modi tries to break up India, to tell me that this is not my home after 90 years,” said Khatun.

She added defiantly: “Scared? Who said anything about fear. I have never been in a protest before but I will not be moving and if I die here, then I will die fighting for my children and my country.”

The unrest that engulfed India last month after the passing of a new citizenship law that many believe openly discriminates against Muslims and undermines the secular foundations of India’s constitution has shown no sign of abating. Every week, millions have continued to take to the streets against the Citizenship Amendment Act, and what many see as an unacceptable attempt by the prime minister, Narendra Modi, and his BJP government to implement their Hindutva [Hindu nationalist] agenda and redefine India as a purely Hindu country. While the government has attempted to quash the protests, with bans on gatherings of more than four people and increasing police violence and torture, it has only fuelled the fire of discontent across India.

Strikingly, the loudest voices of dissent have largely been women. From activists and lawyers to students, housewives and grandmothers, both Hindu and Muslim, women across India have been at the forefront of the resistance to the new citizenship law, and a nationwide citizenship test, known as the NRC, which could result in millions of Muslims being declared illegal aliens in their own country. For many, it is the first time they have had any political engagement at all.

The female-driven political awakening sparked by the CAA has been most jubilantly epitomised by the gathering at the Muslim-majority neighbourhood of Shaheen Bagh that began in late December, when hundreds of women blocked a main road and began a sit-in demonstration against the new citizenship law. Since then, numbers have swelled, drawing in a cross-generational, largely female crowd unlike any protest seen in India before.

Among them was 82-year-old Bilkis, who had been camped out for over a month. “In my whole life, this is the first time I have taken part in any political movement,” she said. “Before this I was a housewife, I never left the house. Now I eat here and sleep here, I go back home just every couple of days to get new clothes. It is cold sometimes but it is not difficult. How can I sit by knowing that my children might be thrown out of this country which is their home and made to go to prison or sent to Pakistan? I will only leave this place when my children’s lives are safe. We are powerful and Modi is now afraid.”

Nusrat Asra, 43, said she had abandoned her life as a housewife for the first time, to sit with the women of Shaheen Bagh every day. Her husband had initially been resistant, she said, “but now he knows why I am fighting”.

The reasons the protests have struck a chord with India’s women are multifaceted. On a pragmatic level, they are likely to suffer disproportionately from the CAA, which requires certain documents to prove citizenship. Across India, women generally tend to have less documentation, to be poorer, more excluded from the ambit of official administration, often don’t have their names on property documents, have frequently moved away from where they were born to get married and are less likely to have their births registered.

Yet according to Karuna Nundy, one of India’s most prominent lawyers who has been vocal against the CAA and spoken at multiple demonstrations in opposition to the law, it runs deeper than that for India’s women. “Being a woman in India feeds into the experience of, and resistance to oppression. We know exclusion, and we know it viscerally,” said Nundy.

“But it’s important to see how the rise of Hindutva has been powered in part by a toxic masculinity. A lot of the imagery and action around it, is very macho, violent, explicitly supremacist and hostile to women. Our constitution speaks of camaraderie between citizens. What we are seeing in some women’s leadership and at Shaheen Bagh is an energy that’s gentler. It’s happier, more nurturing and yet strong and determined. And I think that is really speaking to the country as a counter to the toxic masculinity of Hindutva.”

As well as the women of Shaheen Bagh, some of the most iconic images and footage of the protests have been of women, often Hindu and Muslim side-by-side, bravely standing up to an onslaught of all-male police officers frequently sent to disperse peaceful demonstrations.

One such video that went viral was five female students at Delhi’s Jamia Millia Islamia university who surrounded a young man to prevent the police beating him with batons after they violently descended onto the university campus. Chanda Yadav, a 20-year-old student who was one of the five women in the clip, said she came from a conservative household in rural Uttar Pradesh where women were taught not to speak up or fight back and was the first woman from her village to take part in the demonstrations.

“I am not afraid,” said Yadav. “I wanted to save my friends and my country and that is why I fought back against the police on that day and why I have been fighting against CAA since.”

The spirit of Shaheen Bagh has proved infectious, and over the past two weeks, similar female-led sit-ins have cropped up across the country, including in Kolkata’s Circus Maidan park. Sitting among the protestors was Navamita Chandra, 25, a student of Jadavpur University in Kolkata. She had already taken a vocal stand against CAA when she refused to accept her degree from the vice chancellor of her university in protest against the attacks by police on the students in Delhi and Uttar Pradesh during the anti-CAA and anti-NRC demonstrations. Walking onto the stage, she held a placard, which read: “I cannot take my degree ceremonially when fellow students are beaten, blinded and killed.”

“Women from all background are waking up and taking to the streets in unprecedented numbers, it’s incredible to see ,” said Chandra. “We will not let our Muslim brothers and sisters be demonised and threatened. My father is not a fan of me taking part in protests but my mother is definitely still more of a trooper – she understands why I’m taking to the streets and she realises that we’ve come to a point where it is more important now than ever to raise our voices.”

For Shafqat Rahim, a 25-year-old law student from a conservative Muslim family, the anti-CAA protests in Kolkata had been a moment of political awakening. “The protests are shaping up like a revolution where women have taken the leading roles,” she said. “We, the women, will remove the fascist rulers.”

Minister for Education Rosy Akbar says: Taking time out for your children is a must.

WORLD NEWS: Who runs the country if Boris Johnson is out...