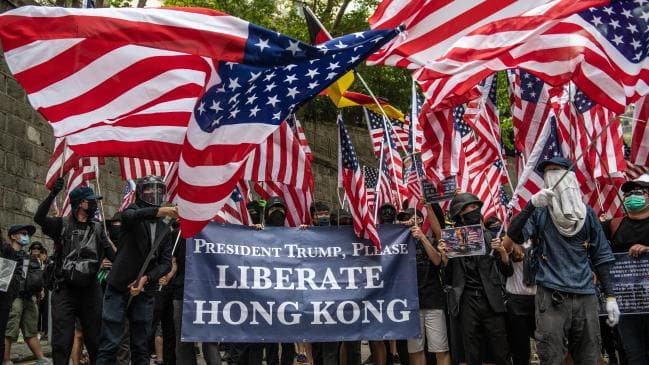 The Hong Kong government has sought to silence disturbing rumours that at least three people were beaten to death in protests.

The government released a statement, denying the rumours and calling them “irresponsible”.

“It is deeply regrettable that such an irresponsible rumour keeps spreading with the ill-intent to mislead members of the public, and to sow division and discontent in society at a time when the government is sincerely trying to establish a dialogue platform,” it said.

The rumours surfaced online after anti-government protesters clashed with riot police during last weekend’s round of protests.

Footage of these protests went viral after police stormed a train and were seen beating protesters and spraying them with tear gas as they begged them to stop.

Police, in turn, claimed they entered the station at the MTR’s request to stop protesters from vandalising ticketing machines and harassing elderly train passengers.

Shortly after, rumours circulated that three people had died, with some putting the number at six, The South China Morning Post reported. But the names of the alleged victims never surfaced.

On Friday night, a woman told Hong Kong Free Press that “her friend” was among six people “executed” by police, claiming her parents failed to see the body.

But police continue to reject claims there are any deaths. The MTR Corp also denied the rumours and the Hospital Authority, the statutory body that manages all government hospitals in Hong Kong, said it had no records of deaths related to the incident.

Despite this, people continue to frequent the Prince Edward MTR Station, placing hundreds of white flowers and other symbols at the entrance in solidarity with the protesters.

Over the weekend, thousands of demonstrators in Hong Kong urged President Donald Trump to “liberate” the semi-autonomous Chinese territory during a peaceful march to the US Consulate.

Many of them, clad in black shirts and wearing masks, waved American flags and carried posters that read “President Trump, please liberate Hong Kong” as they marched to the US Consulate nearby.

Hong Kong has been rocked by three months of unrest sparked by a proposed law that would have allowed criminal suspects to be sent to mainland China for trial.

Many saw the extradition bill as a glaring example of the erosion of civil liberties and rights promised under a “one country, two systems” framework when the former British colony returned to Chinese rule in 1997.

Hong Kong’s government promised this past week to formally withdraw the bill, but that failed to appease the demonstrators, who have widened their demands to include calls for direct elections for the city’s leaders and an independent probe into alleged police brutality against protesters.

Protesters urged Washington to pass a bill, known as the Hong Kong Democratic and Human Rights Act, to support their cause. The bill proposes sanctions against Hong Kong and Chinese officials found to suppress democracy and human rights in the city, and could also affect Hong Kong’s preferential trade status with the US.

Just before the rally ended, violence erupted after riot police detained several people and cleared a crowd from the nearby Central subway station. Angry protesters smashed glass windows, sprayed graffiti and started a fire at one at the station’s exits.

The government said protesters also set street fires and blocked traffic at some thoroughfares. In the type of cat-and-mouse battle that has characterised the summer-long protests, riot police pursued groups of protesters down streets, but they kept regrouping.

Police fired multiple rounds of tear gas in the Causeway Bay shopping area after protesters heckled them and refused to leave. They also searched dozens of young people on the street and inside subway stations.

At the Mong Kok police station, clashes took place for a third straight night. Police fired projectiles at an angry crowd that was shining laser beams, and several people were detained.

The US State Department said in a travel advisory Friday that Beijing has undertaken a propaganda campaign “falsely accusing the United States of fomenting unrest in Hong Kong”. It said US citizens and embassy staff were targeted and urged them to exercise increased caution.

Some American legislators are pressing Mr Trump to take a tougher stand on Hong Kong. But the president has suggested that it’s a matter for China to handle, though he also has said that no violence should be used. Political analysts suggest that Mr Trump’s response has been muted because he doesn’t want to disrupt talks with China over their tariff war.

At least 5,000 troops and police begin security operation to tackle...