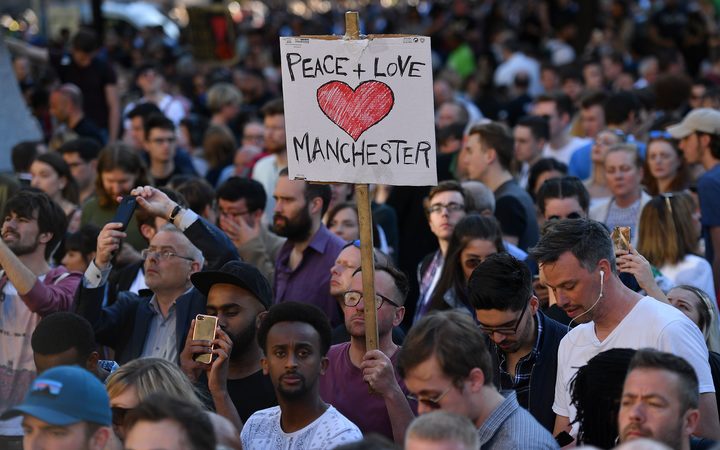 Thousands of people have gathered at a vigil in Albert Square to remember people who lost their lives in the Manchester Arena attack.

Twenty-two people were killed and 59 injured when a suicide bomber struck at an Ariana Grande gig on Monday night.

The suspected attacker has been named as 22-year-old Salman Abedi.

A minute’s silence was held as crowds spilled out on to nearby roads.

“The people of Manchester will remember the victims forever and we will defy the terrorists by working together to create cohesive, diverse communities that are stronger together,” he said.

Bishop of Manchester David Walker lit a candle at the vigil, which began at 6pm.

Greater Manchester Chief Constable Ian Hopkins said he was heartened to hear the acts of kindness from emergency service workers and normal people.

He also thanked “the rest of the world for holding us in their thoughts”.

“You can see throngs of people have come out to pay their respects … but in the end it’s the resolution that says ‘we’re not prepared to be divided’.”

Mr Lloyd said “we pride ourselves on our diversity” and that diversity could not be “challenged by one evil individual”.

“We’ll get through this because that is the spirit of Manchester.”

Members of the Manchester Sikh Community were providing free refreshment, having arrived in Albert Square singing and receiving a round of applause.

They said they will be giving out food “to help the city at a time when things are bad”.

Lu Bowen, 40, brought flowers to lay as a mark of respect, and said it has been a “horrific” day but said she wanted to show a sense of “solidarity and commitment that Manchester always has”.

Standing alongside her teenage daughter Lucy, she said: “We watched it all unfold last night.

“When the chips are down, Manchester always pulls together.”

Roads around Albert Square were set to be closed from 5pm until about 7pm.

Vigils were also held in cities across the UK, including in Belfast and Glasgow where people held posters which said: “We stand together. Manchester.”

North Korea warns ‘more gift packages’ on way to US amid...