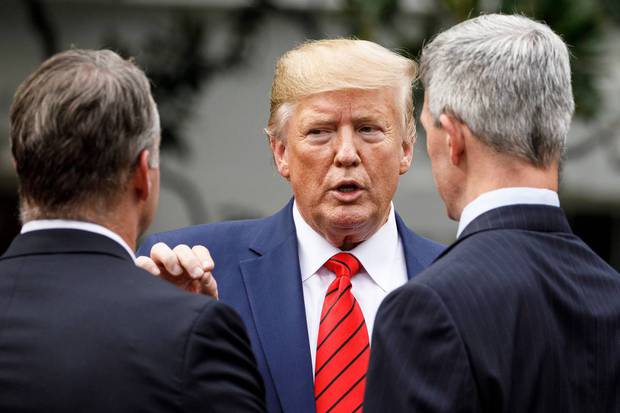 J.W. Verret, a law professor who worked as an adviser to Mr Trump during his transition to the presidency, said the apparent courting of help from a foreign power was a far more serious offense than former President Nixon’s cover-up.

“People have made the analogy to the Nixon-era scandals and Nixon’s resignation, but this is a lot worse than that,” Mr Verret said during an appearance on CNN. “Nixon was a patriot. Of all the crazy things he did, he never would have accepted help from a foreign power for his own personal interest in an election, particularly one that would compromise the US’ strategic interests,” Mr Verret added.

“This is much worse and I think momentum continues toward impeachment.” Facing almost certain impeachment after tape recordings confirmed his knowledge of and involvement in the robbery of the Democratic National Committee headquarters in Washington DC, in 1974 President Nixon resigned before the House could impeach him.

Experts say Mr Trump is much less likely to be impeached compared to the two American presidents who have been — Bill Clinton in 1998 and Andrew Johnson in 1868 — because America’s government is more divided along party lines than ever before.

Mark Updegrove, a presidential historian and president of the LBJ Foundation in Austin, Texas, told the Associated Press enduring support from Republican politicians currently separates Mr Trump from Mr Nixon, who resigned in the midst of the Watergate impeachment inquiry because his party began to abandon him.

“The big difference between this and Watergate is that you had both Republicans and Democrats being deeply concerned about the president being involved in criminal wrongdoing,” Mr Updegrove said. “It was a bipartisan effort and you certainly don’t have that here.”

But it is early, compared with Watergate. There were small signs that some Republicans were trying to keep some measure of distance from the president. Some GOP politicians fled Washington for an autumn break claiming they hadn’t yet read the whistleblower’s complaint. Others said they were open to learning more about the situation.

Mr Trump’s hold on the Republican Party makes it nearly impossible to foresee a scenario in which the GOP-controlled Senate convicts him if he were impeached by the Democratic-run House.

The president is acutely aware that it’s his party alone that can protect him. In the midst of the past week’s firestorm, he tweeted to Republicans: “Stick together, play their game and fight hard Republicans.” He later deleted the tweet.

It comes as Democrats on Monday subpoenaed Rudy Giuliani, the president’s personal lawyer who was at the heart of Mr Trump’s efforts to get Ukraine to investigate political rival Joe Biden’s family.

Democrats moved aggressively against Mr Giuliani, requesting by October 15 “text messages, phone records and other communications” that they referred to as possible evidence. They also requested documents and depositions from three of his business associates.

That was after one of Mr Trump’s staunchest defenders, Senate Majority Leader Mitch McConnell, said he would have “no choice” but to consider articles of impeachment if the House approved them.