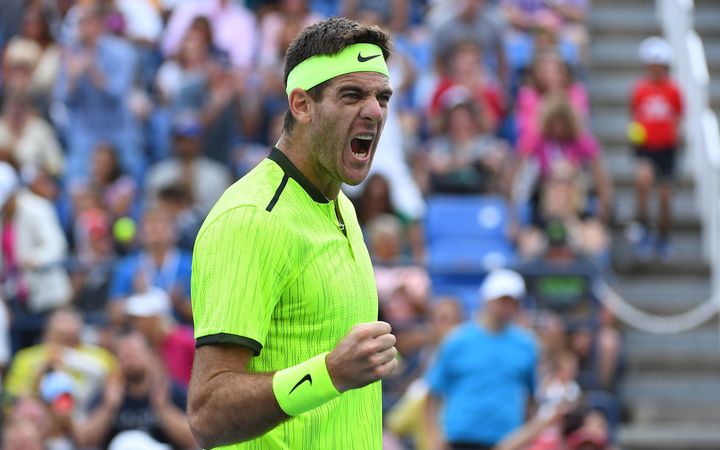 Updated: 6:55am – Argentinean tennis star Juan Martin del Potro admits he exceeded even his own expectations with a 6-2 6-4 thumping of Canadian prodigy Denis Shapovalov in their second round clash at Auckland’s ASB Classic.

The same, however, cannot be said for Jack Sock.

Where the second-seeded del Potro proved too powerful for his green opponent, the top-seeded Sock fell meekly to unfancied German Peter Gojowczyk.

Ranked 65th in the world, Gojowczyk sent the American Sock packing in his first match, winning 6-3 6-3 and dominating from first to last.

As a result, the Auckland field is cleared for the 29-year-old del Potro, who becomes a red-hot favourite to lift his first Classic title since 2009.

He’ll face another young gun in the quarter finals in Russian Karen Khachanov, who defeated sixth seed Pablo Cuevas earlier in the afternoon.

“I tried to focus during my service game and just do what I have to do.

“If you have chances to break, it’s tough to do it, but I did it three times during the match and I played calm because I had a good advantage.”

Cutting a slightly lumbering figure, del Potro was nevertheless effective against the young gun Shapovalov, who made too many unforced errors.

The oft-injured ex-US Open winner thrashed eight aces and flummoxed Shapovalov with a number of vicious forehands, cruising to a 65-minute victory.

Sock, conversely, put in a lethargic performance against Gojowczyk, who served the house down with nine aces and won 88 per cent of first-serve points.

He brushed off suggestions of indifference post-match.

“Up a break in the first and the guy hit some unbelievable turns, painting lines all over the place, slapping balls, coming in,” Sock told reporters.

“I didn’t have my best serving day which didn’t help, got some free points but not as many as I’d like – it’s a rusty first match, you’ve got to get the cobwebs off.”

Fj News: Underground operations at the Vatukoula Gold Mine shut down

National News:- Royal Commission into Chch attacks may be private