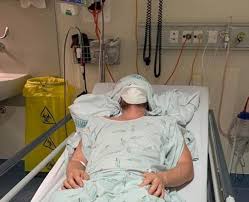 A 45-year-old man who wrongly thought he was vaccinated against measles is in hospital with swelling on the brain after catching the virus. His wife has urged people to double-check they are vaccinated after her husband contracted the highly contagious disease 10 days ago.

The woman – who asked not to be named as the situation was still sensitive – told the Herald she wanted people to know measles could hit anyone and it could be fatal. “This is the true face of measles,” she wrote on Tuesday, sharing photos of him in his hospital bed. “This is my husband … he is 45. Strong, healthy and physically fit.”

She encouraged people to share her post online in the hope that at least one person would get vaccinated as a result. “This virus is horrific. If it can do this to a fit 45-year-old male I can’t imagine how a child or baby would cope.”

Encephalitis – Inflammation of the brain – is a rare complication that affects about 1 in every 1000 people who catch measles, according to the Immunisation Advisory Centre. Of those cases, about 15 percent die and about one third are left with permanent brain damage.

The woman said she had no idea what measles encephalitis was until doctors diagnosed her husband. She was stunned when the doctor told her there was no treatment – they could only offer him support like keeping him hydrated and managing his pain.

“[He said that] as medical professionals, this is what we’re trying to stop because once we get here this is the worst of it.” Doctors told her it was clear from the severity of her husband’s symptoms that he hadn’t been immunized. Her husband’s condition had improved in the past day or so.

People have been encouraged to check their vaccination records and request a dose of the measles-mumps-rubella (MMR) vaccine from their doctor if they are unsure whether their vaccinations are up to date.

Medical facilities have run low on MMR vaccines but a fresh batch of 52,000 doses has arrived in the country and is being readied for distribution. New Zealand’s director-general of health, Dr Ashley Bloomfield, said processes were being fast-tracked to ensure extra stock was distributed as quickly as possible.

The first half of the 52,000 doses were being distributed around the country from yesterday or today, he told Newstalk ZB. The second half would be kept to replenish stocks where needed and focus on the outbreak in Auckland.

The Ministry of Health and Pharmac also announced yesterday an extra 100,000 doses had been secured. So far this year 175,000 vaccines had been given, compared to 94,000 in the same period last year, Bloomfield said.

“Due to this unprecedented demand, we are asking New Zealanders to continue to be patient so they can ensure the vaccine can reach those who need it the most,” Bloomfield said.

New Zealand’s measles outbreak is now believed to have surpassed that of the United States. Since the start of this year, there have been 1348 confirmed cases of measles notified across New Zealand, according to the Ministry of Health. Of those cases, 1120 were in the Auckland region.

The US has also been battling an outbreak of measles but it has been trending steadily downward since peaking in April. As of September 6, the US-based Centres for Disease Control had recorded 1241 cases in the US this year, but from September 6-12 no new cases were reported.

That means it’s likely New Zealand has now well surpassed the US figure. An unusually high number of people – about 35 per cent – have been sent to hospital after contracting measles during this outbreak. Previous outbreaks had a much lower rate of hospitalisation.

Measles: Who should get vaccinated?

• Anyone who has not received at least one dose of a measles-containing vaccine or who has not already had measles is most at risk from the virus.

• The MMR vaccine is free to people born on or after January 1, 1969. Two doses give 99 per cent protection against measles.

• People born before this date are presumed to be immune as they are likely to have caught the disease when they were younger.

• Medical authorities are targeting vaccination efforts at children under 5, who are the most vulnerable to catching the disease and to complications.

• Pacific peoples and people aged 15-29 are also a priority as these are the groups where the disease is spreading the fastest.

• Vaccinating within 72 hours of exposure can help stop the disease’s spread. DHBs are being asked to try and vaccinate susceptible close contacts of infected people within this time frame if possible.

Featured Image- This 45-year-old was healthy and fit until he got infected with the measles virus 10 days ago. Photo: Otago Daily Times / via google image

The Ba vs Rewa match in the Vodafone Fiji FACT tomorrow

The new Savusavu market is currently being investigated.

NATIONAL NEWS: Flight with latest Covid-19 case there was no social...