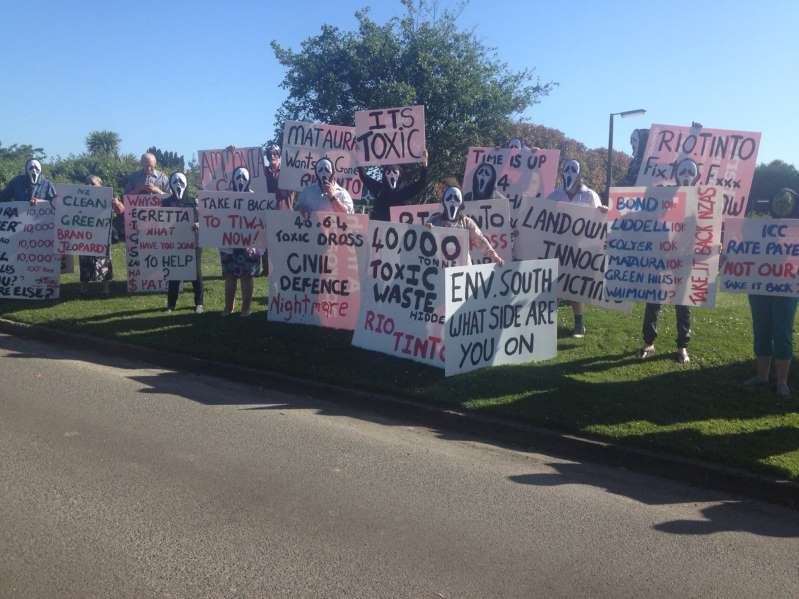 There’s nearly 10,000 tonnes of potentially toxic waste causing anger and anxiety in a tiny Southland town. We look at the secret deal that put it there, and the battle against a faceless entity to get rid of it.

Mataura used to be a paper mill town. Nowadays the old white warehouse building that sits by the river, right in the middle of town, is used for storage. But not ordinary storage. For years it has been the resting place of what they call Ouvea premix – waste from the aluminium smelter that, once wet, is highly toxic and releases ammonia.

The company contracted to deal with the waste, Taha, is now in liquidation, leaving a literal and figurative mess behind.

It secretly put bags of the stuff in the old mill buildings in 2014 without telling anyone about it – and it certainly didn’t get a resource consent.

RNZ’s Ian Telfer has been covering all the twists and turns.

“It was only [in 2014] that the council found out, the community found out, and the council had to scramble – and found that it had 10,000 tonnes of the material in one-tonne bags.

“It’s just ended up as a very hot potato for the smelter, the council, the community and government – and a big mess to clean up,” he says.

Taha was given a retrospective resource consent when it was discovered, but had to pay a $2.3 million bond in case they went bust, so the council would have the money to shift it out if they had to do so.

“Ironically Taha appealed that to the Environment Court and it was never paid. So one of the things that happened when it went bust was … the council didn’t have a cent.”

There are different stories as to how Taha went broke, but along the way they had staff who were handling the substance hospitalised when it got wet, they couldn’t extract or on-sell aluminium from it as they’d hoped, and the owner says the Tiwai smelter owners tried to screw down the price of the contract. It all came to a head in 2016, Taha liquidated and 22 staff made redundant.

A $4m deal was struck in July 2018 which would have seen the waste shipped to Australia for processing, but people were worried about the possibility of the Mataura river flooding in the 18 months to three years it was expected to take to move it offshore.

In February we saw the biggest flood on record in Mataura, the water coming in and up into the mill building.

By mid-morning police were ordering everyone out because of the public health threat.

While Mataura residents watched anxiously as flood waters swamped the town, a crucial meeting was going on between the council’s CEO, a representative from the Environment Minister, and the head of NZ Aluminium Smelters, Stewart Hamilton, at the NZAS office.

Just over a week ago Gore District Mayor Tracy Hicks thought he had a hand-shake deal that would fast-track the removal of the ouvea. But the board of the smelter’s parent company, Rio Tinto, overruled it.

The bulk of the ouvea is still there, about 9500 tonnes of it. Locals want it gone, preferably back to a safe site at Tiwai.

But Hicks says they’re battling away against a faceless entity.

Muslim groups are calling for more action and accountability over the...

Fear grow that refloating Ever Given, which is stuck on sand...