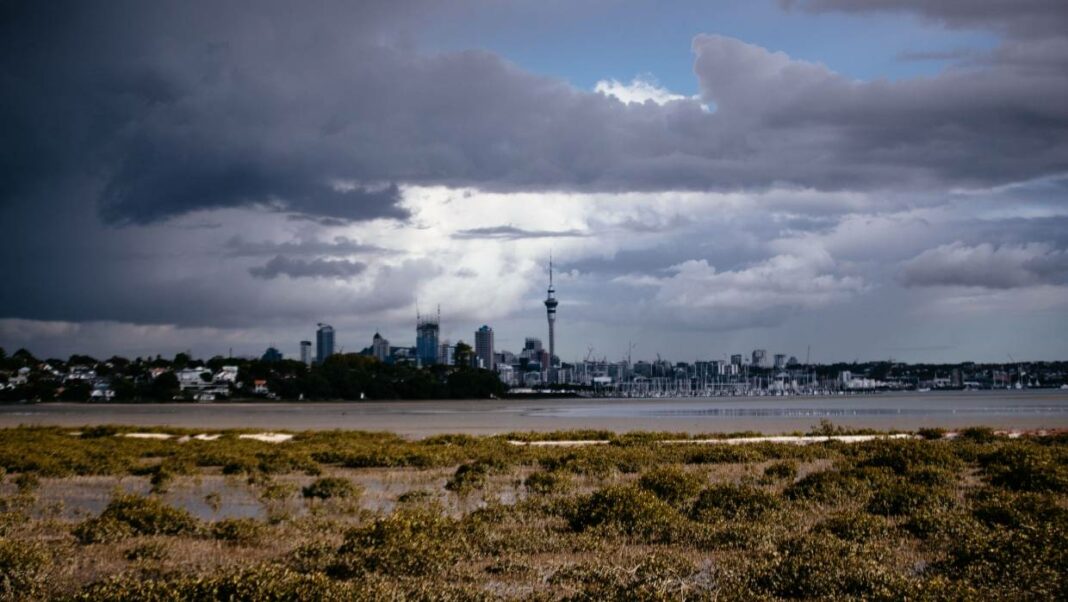 It’s a wet and dreary start to the working week for much of the country with heavy rain, thunderstorms and lightning on the horizon.

A series of fronts are expected to bring wet weather to most of New Zealand for the first half of the week.

On Monday, a cold front was moving across the east coast of the South Island, bringing unstable weather, periods of heavy rain and possible thunderstorms to Canterbury and Otago in the afternoon.

Another front was also moving across the North Island, with thunderstorms and lightning strikes happening off Auckland’s coast.

A tweet from MetService showed there were 38 lightning strikes in just 30 minutes on Monday morning.

MetService meteorologist Amy Rossiter said the thunderstorms were happening out to sea off the west coast of Auckland.

There was currently a low risk of thunderstorms for Auckland itself, but the front was expected to move across the city throughout the day.

That front would bring periods of heavy showers, which were expected to ease in the evening. A high of 20 degrees Celsius was forecast.

Other places which could see possible thunder and lightning on Monday were Northland, the Coromandel Peninsula, Waikato, Waitomo, Taupo and the Bay of Plenty, which all have a low risk of thunderstorms.

Those in Wellington will also have some heavy showers and strong northwesterlies on Monday, but that’s expected to clear by the afternoon. A high of 16C is forecast.

Some heavy downpours and southerlies are also on the cards for Christchurch, with a possible thundery afternoon as a cold front moves across the east coast of the island. A high of 17C expected.

And in Dunedin, rain is also forecast, with some heavy downpours expected. But the rain is expected to ease by Monday evening. A high of 15C is expected.

Fiordland and parts of the West Coast will also have showers on Monday, however the worst of the thundery weather had already passed through, Rossiter said.

Unfortunately the wet and dreary weather is expected to hang around the country for the next few days.

A series of fronts will bring periods of heavy rain and northwest gales to parts of southern and central New Zealand on Tuesday and into Wednesday evening.

A tweet by Niwa showed a wet and cloudy forecast for the middle of the week, saying: “Summer isn’t quite here yet, you’ll certainly notice that fact over the next few days”.

On Tuesday, rainfall is expected to be particularly heavy in Fiordland and Westland, and will likely reach warning criteria, MetService warns.

The Canterbury Lakes and also Otago will also have some periods of heavy rain on Tuesday, with strong winds also expected in the Canterbury High Country.

Gales will be strong in exposed parts of Marlborough, Wellington and Wairarapa late on Tuesday and into early Wednesday.

But the end of the working week, things will be looking a little brighter. A ridge of high pressure is expected to move over the country from the Tasman Sea on Thursday, bringing fine weather and some sunny spells.

That high pressure system should remain over much of New Zealand on Friday.