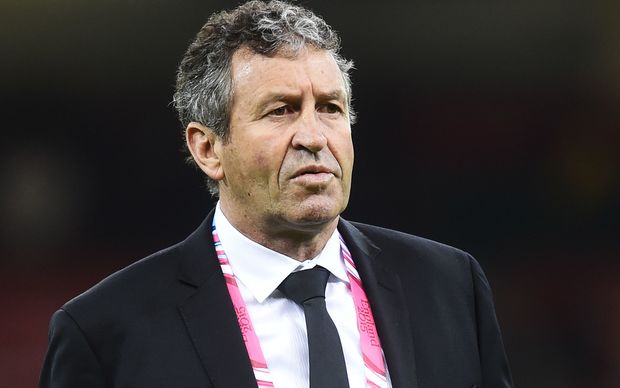 Updated: 7:07am – Departing All Blacks defensive mastermind Wayne Smith says his troops could not have farewelled him any better in his final home Test with a resounding 57-0 victory over South Africa in their Rugby Championship showdown on Saturday.

Smith will soon bring a storied 20-year coaching career at the Test level – both as head coach and assistant to Graham Henry and Steve Hansen – to an end.

His final Test will be the third Bledisloe Cup clash against the Wallabies on October 21.

Yet he was grinning from ear to ear after the All Blacks’ triumph, saying he could hardly remember a more dominant performance across the park.

NZ not only put on a defensive masterclass, they scored eight tries on Saturday.

“It’s sort of a dream performance to finish on, all round – that’s the best forward display I’ve seen in ages, it was incredible,” Smith said.

“Brutal in defence, brutal in attack, and that’s what you’re looking for.”

Nicknamed “The Professor”, Smith is considered the All Blacks’ tactical genius and has helped engineer two Rugby World Cup triumphs.

He will be replaced by ex-Highlanders assistant Scott McLeod at the conclusion of the Rugby Championship.

But before that happens, Smith is keen to reach new heights with the side.

Upcoming trips to Buenos Aires and Cape Town, as well as their Bledisloe dead rubber in Brisbane, are a great chance for the side’s young guns to shine.

Smith said that, alongside Hansen and Ian Foster, he’d worked hard in 2017 on developing his players’ decision-making skills.

“When a lot of these young guys came in last year, it was easy – we just gave them a task to do and they just went for it,” Smith said.

“But you’ve got to develop their decision-making, so we sort of overloaded them in terms of, `You’ve got to look for this’ or `These are the sort of things you need to see’, and to communicate them.

“I think that’s starting to come through.”

NATIONAL NEWS: The National Party is lashing out at the Government’s...