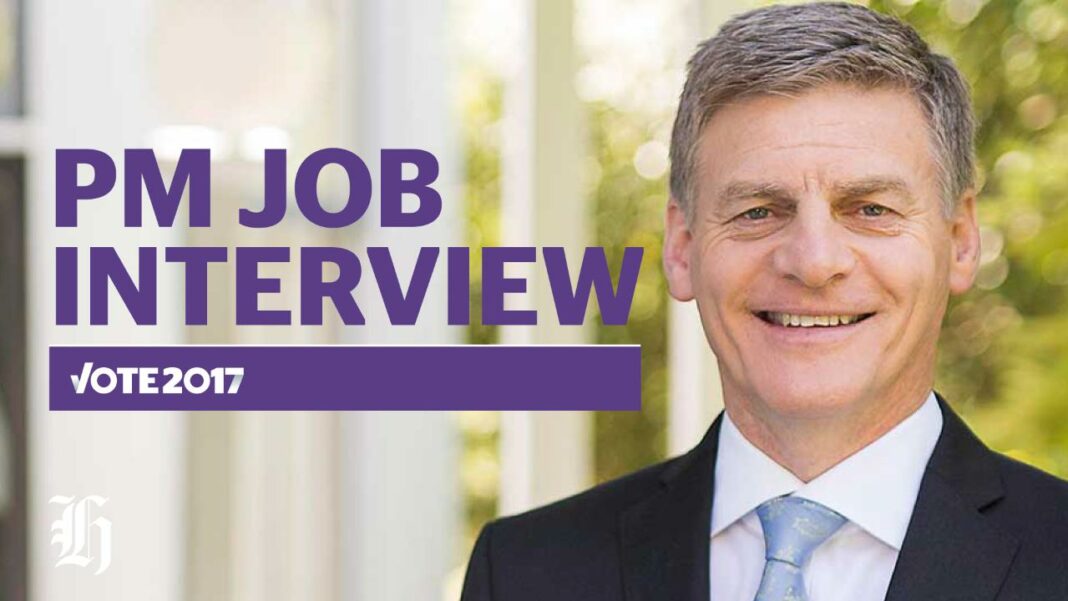 UPDATED: 6:56am – Prime Minister Bill English says he expects his children will be able to buy property without his financial help – and the chances of other young people doing so are “improving quite significantly”.

English has today faced up to the PM Job Interview, fielding questions from a panel of Herald experts in front of an audience as he bids to keep the party in Government and himself in the Prime Minister’s chair.

English was quizzed on everything from his biggest weaknesses to his vision for the country. He showed passion when asked if his social investment approach was a callous way to save money, and said ending homelessness in Auckland was realistic. 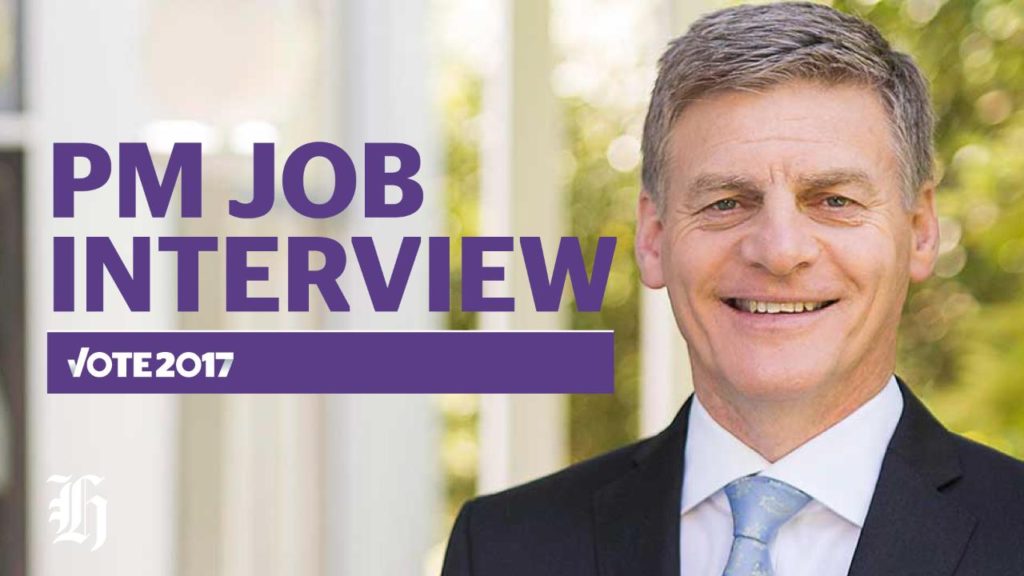 He also made revealing comments about Winston Peters – saying he would expect Peters to approach National first in post-election negotiations should it be the largest party, and that his party “certainly wouldn’t want Mr Peters near monetary policy”.

On housing affordability, English revealed none of his children owned property yet, saying that was because they were not at the stage of their lives where that was a priority.

When they chose to buy property, he expected they could do so without financial support from their parents.

“I think they probably could. And the good news for them is there are 200,000 houses being built over the next six years, and the system is now working.

“So if we have a flat to falling market, with all those houses coming into the market, and rising incomes then that generation – which I’m pretty familiar with because I’ve got six children under 30 – then their chances are now improving quite significantly.

“Their opportunities are improving. Housing affordability is going to get better. We want everyone to have that opportunity.”

With polls indicating New Zealand First will hold the balance of power after the September 23 election English was grilled on his own relationship with Peters, saying he had known him for a long time but “we’re certainly not mates”.

“Weren’t you the guy that actually moved his expulsion from the National Party caucus, and do you think he’s forgiven you?” Young asked.

“I seconded the motion in the National Party caucus,” English said. “We have been in coalition together in 1996. That proved to be quite challenging. This is really about the voters’ judgment.”

Dann asked English if he could reassure the market that he wouldn’t let Peters “anywhere near monetary policy”.

However, he would not rule Peters out as Finance Minister, only saying he would want Steven Joyce in that role and such decisions would depend on voters.

• Asked what his biggest weakness was, English said he tried not to dwell on that question but instead focus on his strengths.

“In my case, I can be pretty dogged, pretty focused on the longer-term and stick at it. And where I’m not so good on some things, that’s what a team is for.”

• English yesterday condemned Gareth Morgan’s “lipstick on a pig” comments about Jacinda Ardern and said he couldn’t work with the Opportunities Party (TOP) if Morgan kept up such attitudes.

Asked if that meant he was ruling out working with TOP, English told the interview panel he was not.

• English was asked about the increasing signs of homelessness in Auckland under National’s watch. He said a Housing First pilot had recently started in Auckland, and a similar scheme in Hamilton had almost ended homelessness there. The same could be done in Auckland, he said.

“In just four months they have shifted 150 people who were sleeping rough mostly into private housing. And if we keep going they can achieve here in Auckland what has pretty much been achieved in Hamilton. And that is almost no one sleeping rough.”

• English reacted strongly to a suggestion the social investment approach he has championed in Government makes him look callous, given one goal was to save money by better targeting support, particularly to young people so they don’t suffer poor outcomes like prison or long-term welfare dependency.

“I think you are completely wrong. The finances show the measure of failure…the system too often feeds off misery. We are trying to reduce it.

“For a child where you know they are going to cost $1 million in public services – that is an awful life. Anyone who has seen that piece of analysis changes their mind – they immediately say, we have to do something different…the economy – the strength of it and the surpluses – to really invest in that in a comprehensive way with some confidence that whatever it’s going to take, we can probably afford it.”

• On how National’s new policy to send youth offenders to boot camp at Waiouru matches that social investment approach.

“It’s not a boot camp in the sense of people living in tents doing press-ups. It’s a wrap-around service on which we will spend around $100,000 per person. Because those 150 worst young offenders could leave a trail of destruction for 20 years.

Hazardous waste less than 100 metres from a fast-eroding Southland beach.

PM says he is not making misogynistic comments

A separate company structure will run the operations of the Fijian Drua for the 2022 Super Rugby competition.

World Rugby say many of the proposals were already being actioned.