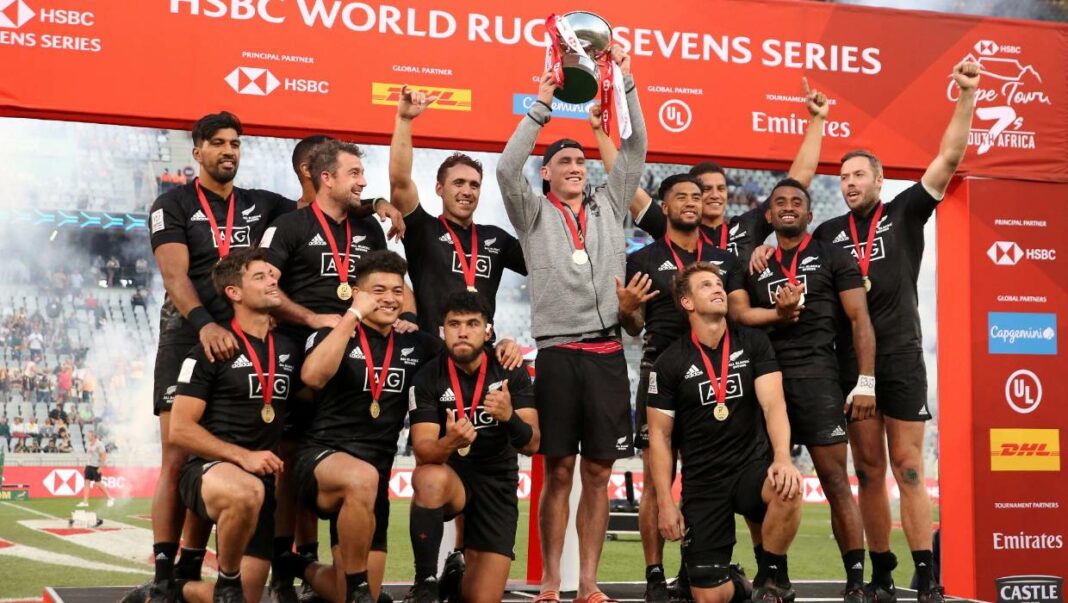 New Zealand has done the double at the Cape Town sevens tournament, winning the women’s and men’s titles.

The Black Ferns beat Australia 17-7 to win the women’s title – and clinch a second consecutive victory on the world sevens circuit – and then watched the men’s side come from behind to edge host nation South Africa 7-5.

Man of the match Ngarohi McGarvey-Black sealed the men’s crown with a converted try late in the second half after a scoreless first period.

The South Africa Blitzboks hit the front with a try to Justin Geduld soon after the restart.

New Zealand captain Scott Curry said “it doesn’t get much tougher than that” after “an awesome final” in front of “50,000 fans singing their national anthem”.

The victory was all the more sweeter after South Africa had blanked New Zealand 15-0 in the Dubai tournament final a week earlier – the first time the Kiwis had been held scoreless in a final for 19 tournaments.

Curry said his side “knew it was going to be tough” again, and described the match as “a fitting final”.

“The support here has been amazing and all the support back home has been great too. We’re looking forward to getting home and spending Christmas with our families.”

New Zealand beat Scotland 35-19 in the quarterfinals at Cape Town and then crushed arch-rival Fiji 24-7 in the semifinals.

The Black Ferns lead the women’s series after three rounds following a player of the match performance by two-try Ruby Tui in the Cape Town final.

New Zealand opened with a third minute try to Kelly Brazier, and led 12-0 at halftime after Tui’s first try.

Ellia Green cut the deficit to 12-7 with a converted try – her 130th on the world sevens circuit -early in the second spell, but Tui sealed the deal with her second try two minutes from fulltime after fending off Cassie Staples.

Black Ferns captain Tyla Nathan-Wong said she was “getting emotional just thinking about” the achievement of winning the first-ever Cape Town women’s title to back up their success in Dubai in the previous round.

She told a television interviewer she “can’t even hear” over the noise and atmosphere generated by the South African crowd, but she said she was “just so proud” of her team.

“We didn’t start the tournament how we wanted to but we finished it doing what we wanted to do. These last two weeks have just been everything, the girls have worked so hard and we pulled through in the end.”

The Black Ferns had edged England 26-21 after extra-time in the quarterfinal, but beat Canada by 10 points, 15-5, in the semifinal after tries to Alena Saili, Kelly Brazier and Niall Williams.

New Zealand sit top of the standings after three of the eight rounds with 56 points, six more than Australia with USA third on 48 points after finishing fifth in Cape Town.

Canada are in fourth, with 44 points, after beating fifth placed France in sudden-death extra-time to win the bronze medal and avenge their loss in the Pool B decider the day before.