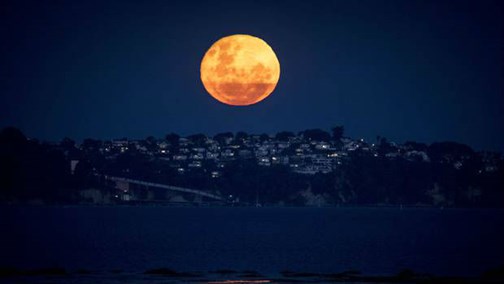 Updated: 6:10am – The largest, brightest supermoon in 70 years is lighting up New Zealand’s skies last night.

The moon was at its closest to Earth during its elliptical orbit, and appeared 14 per cent bigger and 30 per cent brighter than normal.

Clear skies across most of the country made for great viewing conditions, with many would-be astronomers climbing Auckland’s volcanos to get the perfect shot as the moon rose over the horizon just before 9pm.

Wellington resident Zelna Brinton took a snap from her home in Kandallah looking over toward Petone.

“It was absolutely beautiful,” she said. “It’s the first time I’ve seen a supermoon – it was so thrilling.

“It is a bit cloudy but in between the clouds you can see it – it’s still very bright.”

If you didn’t get to see the moon tonight, don’t fret – there will be two more supermoons early next year, on January 2 and 31.

The third supermoon has skygazers excited – as the second full moon in a calendar month it will become a “blue moon”, and it will coincide with a lunar eclipse, making it a “blood moon”. Nasa has named the event the “Supermoon trilogy”.

The pull of the full moon mean tides will be both higher and lower than normal this week, leading to some Auckland ferry services being cancelled because water levels will be too low.

Buses will replace ferries between the CBD and Half Moon Bay on Tuesday, Wednesday and Thursday afternoons.

Villagers are looking to relocate to higher ground due to coastal erosion.