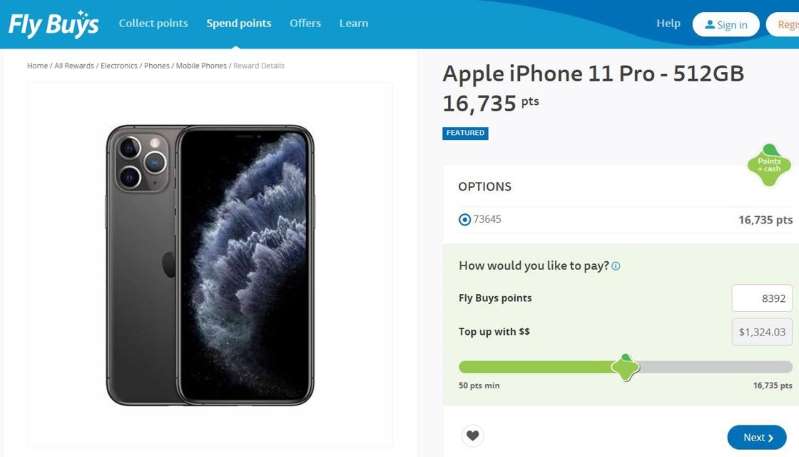 Eagle-eyed customers browsing the Fly Buys rewards catalogue this weekend were seemingly able to buy the latest iPhone for just $140.

Apple’s iPhone 11 Pro Max retails from $2149, but Kiwis received an unexpected discount when buying the phone through the loyalty scheme.

Stuff reports one man ordered eight phones for $1188.59, which is less than the RRP of one iPhone 11 Pro Max.

Another man who bought one of the hugely-discounted Pro Max phones said the transaction had been charged to his credit card but the deducted Fly Buys points had been reinstated.

It’s not yet known whether a website glitch caused the pricing error. Newshub has approached Fly Buys for comment.

The Pro Max appears to have been removed from the Fly Buys website, although the Pro is still available in three different storage sizes. The most expensive model – the iPhone 11 Pro 512GB – is listed for 16,735 points or about $2860.

The new iPhone models – including the iPhone 11, iPhone 11 Pro and iPhone 11 Pro Max – have been available in New Zealand stores since September 20.

Vanua Levu has the potential to develop into a high-end tourist destination.

NATIONAL NEWS: A police officer who raped his colleague in Northland