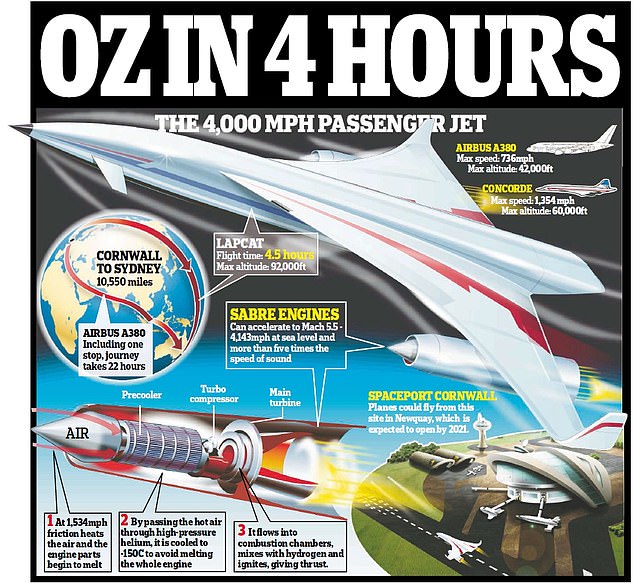 It is a journey that takes more than 20 hours by conventional passenger plane – enough time for several meal breaks and a string of movies. But soon British holidaymakers will be able to touch down in Sydney having barely digested their lunch.

Flights from the UK to Australia could be reduced to about four hours thanks to new engines developed in Britain, experts say. Rocket engines capable of propelling an aircraft to Mach 5.5 – five times the speed of sound – are being developed for use on commercial airliners by Oxfordshire-based firm Reaction.

Dr Graham Turnock, of the UK Space Agency, told the Space Conference in Newport yesterday: ‘This is not sci-fi. This is not a pipe dream. This is literally in the works. It has the potential to turn air travel on its head. Certainly, the way you conceive air travel will completely change in ten years’ time.’

The SABRE – Synergetic Air Breathing Rocket Engine – has a top speed of 4,143mph, meaning the approximate 10,550 miles between the UK and Australia could be covered in just four-and-a-half hours. Dr Turnock forecast that the technology for an operational flight vehicle could be ready by ‘the 2030s’.

The revolutionary technology overcomes one of the key problems of ultra-high-speed flying. Usually, when flying at such a pace, the air entering the engine would reach temperatures that would melt the parts.

But the SABRE will use liquid gases such as helium which, during tests, have been able to cool the incoming air from 1,000C to -150C in one hundredth of a second – without creating ice blockages. Concorde got around the problem using air vents to slow down the air reaching the engine.

Hydrogen will also be used to power the SABRE. It is considered a green fuel as it produces water vapour when it burns as opposed to greenhouse gas carbon dioxide. It has been previously suggested that the design could power a generation of passenger jets called the Lapcat – which will travel at about two-and-a-half times faster than Concorde’s top speed. And while normal long-haul passenger jets cruise at around 35,000ft, the Lapcat could fly as high as 92,000ft.

Shaun Driscoll, of Reaction, said the system could also be used to ‘take off on a runway, go into space, release a satellite and come down’. The company has received around £60million from the Government – matched by industry, including Boeing, Rolls-Royce and Bae Systems. It is likely that SABRE-powered planes will be able to take off from Spaceport Cornwall –which is currently being developed in Newquay in partnership with satellite launch company Virgin Orbit and expected to open by 2021.

Will Whitehorn, of trade association UK Space, said: ‘The Reaction engine is a very interesting technology. If you can find a way to create a motor which can act like a jet engine in the atmosphere and a rocket motor in space, we’ll have cracked one of the biggest conundrums of space launch.’

Will Whitehorn, the incoming president of UK Space, the space industry’s trade association, said the military needed to help protect Britain’s increasing interests outside of the Earth’s atmosphere. He said: ‘We will see and should see the creation of a space force in the UK.’

The former president of Virgin Galactic said that a huge expansion will happen in satellite technology in Earth’s orbit and further in future space stations. He added: ‘We are about to go through an industrial revolution in space, nothing short of that.

‘We have to be able to defend ourselves in space if we know there are non-state and state actors who may be inclined to disrupt in the future the ability of any nation-state to operate commercially in space.

‘It is clear that these technologies are capable of being taken to a level of relatively unsophisticated use. What nation-states like the UK have to do is make sure we are ahead of that game. And we only get ahead by thinking about it in advance.’ Anne-Marie Trevelyan, defence procurement minister, said there are five potential ‘theatres’ of operations for the UK military – air, sea, land, cyber and space.

Featured Image: Flights from the UK to Australia could be reduced to about four hours thanks to new engines developed in Britain, experts say. Photo / Dailymail