Home Top News ‘We have to live with it’: Steve Hansen already moving on 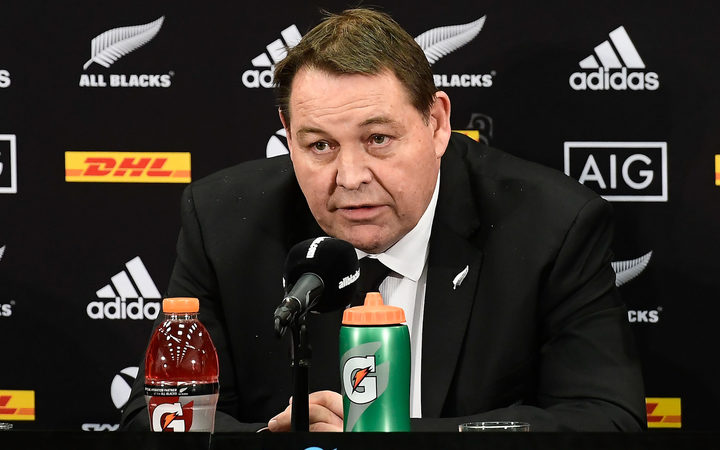 All Blacks coach Steve Hansen has already accepted the contentious call by referee Romain Poite, who overturned his original decision to award a potential match-winning penalty for the home side against the British and Irish Lions.

With the scores locked at 15-15 and less than two minutes remaining, Poite initially awarded the All Blacks a penalty when he deemed that replacement hooker Ken Owens was offside when one of his own players dropped a kickoff into his hands.

The penalty, had it stood, would have given Beauden Barrett a routine kick at goal from in front to both win the match and clinch the three-match series.

Poite, however, stopped the clock and decided to discuss the decision with his assistants Jerome Garces and Jaco Peyper, as well as television official George Ayoub.

The discussion ended with the French official deciding that Owens was accidentally offside and awarded an attacking scrum to the All Blacks instead. The Lions were then able to hold off a late New Zealand surge as the series ended 1-1.

“We are accepting with whatever decisions were made. It’s the decision the ref has made and we will live with it.”

Despite trying to avoid the question throughout his post-match news conference, Hansen compared the decision to the 2015 Rugby World Cup quarter-final between Australia and Scotland.

The Wallabies were awarded a late penalty by referee Craig Joubert when he adjudged the ball to have touched a Scotland player in an offside position, even though replays showed it had ricocheted off Australian scrumhalf Nick Phipps first.

Joubert did not consult the television official and Bernard Foley stepped up to slot the penalty that gave the Wallabies a 35-34 victory and a semi-final spot against Argentina.

“I go back to the World Cup and Scotland missed out because they didn’t use the video,” Hansen said. “This time they did and had a pow wow.

“What we would’ve liked is play-on and we would’ve scored under the posts. I’d have liked that.

“His initial instincts were a penalty. He spoke to his team and one of them said it was accidental.

“We can’t change that. If we scored another try we wouldn’t be having this discussion.”

Lions coach Warren Gatland credited his captain, Sam Warburton, with persuading the referee to change his mind about the potentially game-winning penalty.

“You know, we would have been devastated as a group if we had lost the game from that kickoff,” Gatland said.

“It’s swings and roundabouts: you sometimes get calls that go for you and you get calls that go against you, and the result was probably a fair reflection of where the tour is and two quality sides who really went hard at each other tonight.”

Captains struggle for words after draw

The two captains, meanwhile, were left struggling for words after the draw.

All Blacks captain Kieran Read, who earned his 100th cap in the match, said his reaction was “hard to put into words”.

“You look back at the series and it was well fought out. The two teams couldn’t be split … Maybe we tried too hard as we wanted to put in a great performance. It didn’t click for us tonight but really proud of the lads, we stuck at it.”

His counterpart was equally flummoxed.

“To be honest I’m a bit speechless, I don’t know what to make of it,” Warburton said.

“To come here and not get beaten, I guess we can take some credit for that.

“We can take some positives in getting a draw but obviously the players want to win… [and] I guess it was a bit of an anticlimax.”

Warburton, however, said he was pleased to have been involved in the series and was overjoyed at the level of support the visitors received with more than 20,000 fans travelling to New Zealand.

“This is one of the most special things I’ve been involved in,” Warburton said. “If you have to look at one Lions tour you want to be involved in it’s New Zealand.

“You don’t get support like this in any other sport.”

NATIONAL NEWS:- Royal couple to have public walk-about in Christchurch

Finally It Will Happen In Star Plus Show Yeh Hai Mohabbtein...