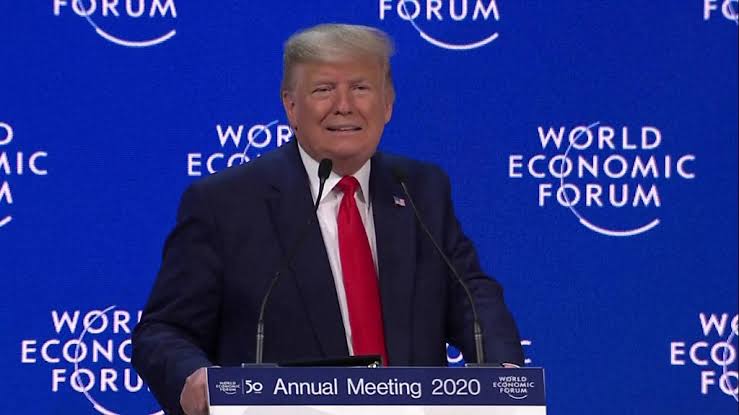 US President Donald Trump has decried climate “prophets of doom” in a speech at the World Economic Forum in Davos, where sustainability is the main theme.

He called for a rejection of “predictions of the apocalypse” and said America would defend its economy.

Mr Trump did not directly name the teenage climate activist Greta Thunberg, who was in the audience.

Later, she excoriated political leaders, saying the world “in case you hadn’t noticed, is currently on fire”.

Environmental destruction is at the top of the agenda at the annual summit of the world’s decision-makers, which takes place at a Swiss ski resort.

What else did the president say?

In his keynote speech, Mr Trump said that it was a time for optimism, not pessimism, in a speech that touted his administration’s economic achievements and America’s energy boom.

Speaking of climate activists, he said: “These alarmists always demand the same thing – absolute power to dominate, transform and control every aspect of our lives.”

Mr Trump also announced that the US would join an initiative to plant, restore and conserve a trillion trees.

“We’re committed to conserving the majesty of God’s creation and the natural beauty of our world,” he said.

The president was speaking hours before his impeachment trial began in the US Senate.

What has Greta Thunberg been saying?

She refrained from naming Mr Trump but issued this warning to the world’s leaders.

“I wonder, what will you tell your children was the reason to fail and leave them facing… climate chaos that you knowingly brought upon them? That it seemed so bad for the economy that we decided to resign the idea of securing future living conditions without even trying?

“Our house is still on fire. Your inaction is fuelling the flames by the hour, and we are telling you to act as if you loved your children above all else.”

She strongly criticised politicians and business leaders for what she said were continuous “empty words and promises”.

The timing of President Trump’s “don’t panic” message is intriguing.

He’s reassuring the Davos rich club about the climate just as the pillars of capitalism are themselves starting to treat global warming as a crisis.

The leading bank Goldman Sachs will no longer fund new investments in Arctic oil or in coal for power stations.

And the boss of investment giant BlackRock has defined climate change as the biggest threat to markets as rising temperatures put profits at risk.

His company manages more than $6.5 trillion (£5tn) of savers’ cash.

Meanwhile the outgoing governor of the Bank of England warns that firms which don’t change will go to the wall.

President Trump – astride an American economy fuelled by cheap gas – thinks they are wrong.

And he’s not alone. Leaders in Australia, Brazil, Russia and Saudi Arabia also cling to economies driven by fossil fuels.

It’s politics vs science: the battle of our age.

What other reaction has there been?

Economist Joseph Stiglitz, a Nobel Laureate, criticised Mr Trump’s speech. According to Reuters news agency he said it was “astounding” and made “as if what we are seeing with our eyes are not there”.

“Only self-praise, ignorance, disregard for everyone, no perception of global problems. It was the worst speech I’ve ever heard in my life.”

What are the climate targets?

The world’s nations committed in the 2015 Paris Agreement to keep temperatures well inside 2.0C (3.6F) above pre-industrial times.

They agreed to try to keep the rise to 1.5C but scientists say they are well off that target.

Daughter Will Never Forget Moment Of Losing Mother To Accident