Home News WORLD NEWS:- There have been conflicting accounts of the number of deaths... 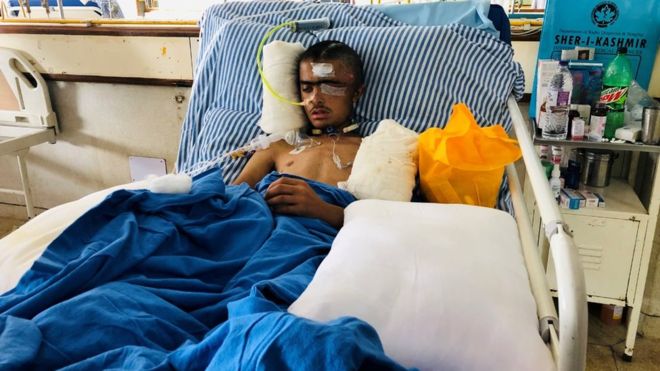 Seventeen-year-old Asrar Ahmad Khan was on the street outside his home on 6 August when he received an injury that led to his death in hospital four weeks later.

Described as a “bright student” who loved sport, the circumstances surrounding his death have become one of the latest points of dispute in the restive region where conflicting narratives of events are steadily becoming the norm.

His father, Firdous Ahmad Khan, alleges that Asrar was playing cricket with his friends when he was struck on the head by a teargas canister and lead pellets. One of his friends who was with him at the time says that he was fired at by Indian paramilitary troops who were withdrawing for the evening.

Asrar’s medical report states he died of injuries caused by pellets, and the blast of a teargas shell. But India’s top army commander in Kashmir, Lt Gen KJS Dhillon, has said that Asrar was hit by a stone, ostensibly thrown by Kashmiri protesters at armed forces.

The Kashmir police have told the BBC that they also stand by this statement. They’ve called the hospital’s report ambiguous, and said it needs further investigation.

The incident took place a day after the Indian government announced that the region would lose its special status and be split into two federally-run territories.

In the days leading up to the surprise announcement, tens of thousands of additional Indian troops were deployed, a major Hindu pilgrimage was cancelled, schools and colleges were shut, tourists were ordered to leave, telephone and internet services were suspended and regional political leaders were placed under house arrest.

A report card showing that Asrar had scored 84% in his tenth grade school examinations, and an old newspaper with a photo of him being awarded a cricket trophy, are among the family’s most prized possessions.

“Does [Indian Prime Minister Narendra] Modi feel my pain? Has he said sorry for this? Has he condemned it?’ Asrar’s father asked the BBC.

“Tomorrow there will be more deaths. In Kashmir today, there is no accountability,” he added.

The Indian government says that not a single life has been lost due to action by security forces since Kashmir’s special status was revoked. However, it has said that two people, including Asrar, have died after being hit by stones thrown by anti-government protesters.

According to the government, three others – two nomadic goatherds in the Tral area of southern Kashmir and one shopkeeper from Srinagar – have been killed by armed insurgents.

The shopkeeper, 60-year-old Ghulam Mohammad, was reportedly sitting inside his shop with his wife on the evening of 29 August when he was shot dead by three people, who then escaped on a motorcycle.

The BBC visited Mr Mohammad’s family but they were too afraid to speak. Police told us they were still investigating the motive behind his murder.

But other people say that the government’s “official figures” do not account for the unnatural deaths of their loved ones in recent days.

Among them is Rafiq Shagoo, who told the BBC he was having tea with his wife Fehmeeda Bano in their two-storey house in the Bemina area of Srinagar on 9 August when clashes between protesters and security forces broke out in the neighbourhood.

Tear gas – commonly used by security forces to dispel protests – filled their home and Fehmeeda, 34, began to choke, he said.

“She told me she was having trouble breathing. So I rushed her to the hospital. She kept asking me ‘what’s happening to me’, and was very scared. The doctors tried hard, but she couldn’t be saved.”

Ms Bano’s medical report states she died of toxic gas inhalation. Her husband is now planning to file a petition in court to ask for an investigation into his wife’s death.

The circumstances surrounding the death of 60-year-old Mohammad Ayub Khan in the Safakadal area of Srinagar are very similar to that of Ms Bano.

Mr Khan’s friend Fayaz Ahmad Khan said he was passing by the area on 17 August when clashes broke out.

He told the BBC that he saw two tear gas canisters land near Mr Khan’s feet. His friend was rushed to a hospital, but doctors said he was already dead. No medical report has been given to the family.

The police told us that it was a rumour that Mr Khan had died from inhaling teargas smoke.

Despite the lockdown in the region, and the frequent imposition of curfew-like conditions, protests against the government and security forces have occurred and have often turned violent.

Hospitals have been tight-lipped about how many casualties they’ve received. Many of those injured have chosen not to go to proper medical facilities to get treated, because they fear they might be arrested for participating in protests.

The government is already believed to have detained thousands of people including activists, local politicians and businessmen. Many have been shifted to jails in cities outside the region.

But even though it’s hard to assess how many people have died or have been injured, it is clear that the scale of the unrest has been much smaller than Kashmir has witnessed before.

“It is in sharp contrast to earlier disturbances of 2008, 2010 and 2016 where a large number of people lost their lives,” governor Satya Pal Malik told reporters.

“All security forces have worked day and night to ensure that normalcy can be gradually restored without causing harm to individuals,” he added.

Many argue, however, that the communications blackout and military clampdown are the real reasons public anger is not on full display.

It’s unclear when the restrictions imposed in Kashmir will be fully lifted – and what is likely to happen when they are.

Restricting the number of people who can enter popular national parks...

China has accused Australia of trying to “deflect public attention”