Home News World News: ‘This is what the apocalypse looks like’: Burning Amazon Rainforest. 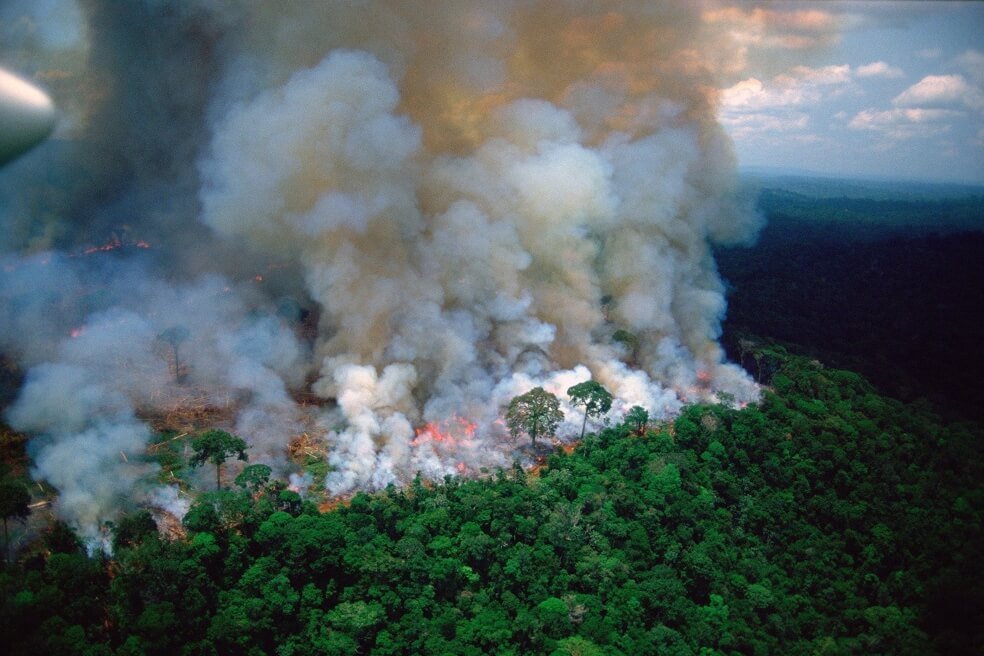 The Amazon, the largest rainforest in the world, roughly half the size of the United States, is key to the health of the entire planet. Its trees produce an estimated 20% of the world’s oxygen while putting an enormous amount of water into the atmosphere at a time when cities are drying up.

The Amazon is sucking in carbon and greenhouse gases while slowing the rising temperatures. But it’s now burning at a record rate — with images from space showing the smoke covering much of Brazil. It’s not the only major forest under assault. Nearly half of the world’s forests that stood when humans started farming are now gone, and each year an additional 32 million acres are destroyed, according to the nonprofit Rainforest Alliance. The biggest reason is the expansion of agriculture into forested areas. In Brazil, it’s cattle ranching, soy production, and logging, according to Nigel Sizer, a tropical forest ecologist, and chief program officer with the Rainforest Alliance. “It is responsible for 80% to 90% of the loss of tropical forests around the world.” Environmental groups say these activities can be slowed or done in a much more sustainable way.

This #Sentinel2 animation (true colour) from 28/07 – 17/08 north of Vista Alegre do Abuña, at the limit of the #Rondonia and #Amazonas states, shows how the fires and resulting smoke developed in this period #activeearth pic.twitter.com/iKeTBxdWnH

“There has been a lot of analysis and satellite data that shows there is so much land already cleared – a lot abandoned or very poorly used and managed that we could use to grow food on,” says Sizer. “We don’t need to be clearing new forests to do this in Brazil.”
Here’s what you can do to help slow forest loss.

You can help reforest parts of the world through the Rainforest Trust and Rainforest Alliance. The Rainforest Trust allows you to restrict your donations to a specific project. The Rainforest Alliance says 100% of your donation will help stop deforestation in Brazil right now. They are working with local groups at the forefront of this fight. Part of the Alliance’s work strives to make Brazil’s current ranches and farms more productive.
The Arbor Day Foundation also has a program to help save tropical rain forests which provide habitat for some 50% of the world’s plants and animals.

Make sure the products you buy are “rainforest safe”

Products featuring the “Rainforest Alliance Certified™” welcome from farms that passed audits and met standards for sustainability. Thousands of products have earned the seal — including coffee, chocolate, and bananas.
If you’re buying tropical wood products, look for the label “Forest Stewardship Council (FSC).” That’s the major certification system for forest and paper products, according to Sizer.
The nonprofit makes sure that the wood is not contributing to illegal logging and deforestation. You can also donate to the group. “Look out for that when you have that option,” Sizer said.

As major forests decrease in size, carbon and greenhouse gases have increased in the atmosphere. But you can help slow that trend.
“Think about greenhouse gas emissions — driving less, buy a more fuel-efficient car,” Sizer says. He also recommends adjusting your thermostats by just a couple of degrees. “It makes a huge difference and saves money as well.”
You can also buy carbon offsets. “If you have to fly for work often — you can buy these offsets by making a small contribution to an organization that is planting trees, sucking up carbon that’s being emitted when you fly. These things really add up.”
About 20% of the Amazon has already been destroyed, and that’s what scares Sizer. “The newest science now says if we deforest, if there’s a clearing of more than about 30% to 40% of the Amazon rainforest, it will start to dry out. We’ll pass an irreversible tipping point.”
Source- CNN
- Advertisement -

NATIONAL NEWS: Mosque attack terrorist has got “what he deserved”.