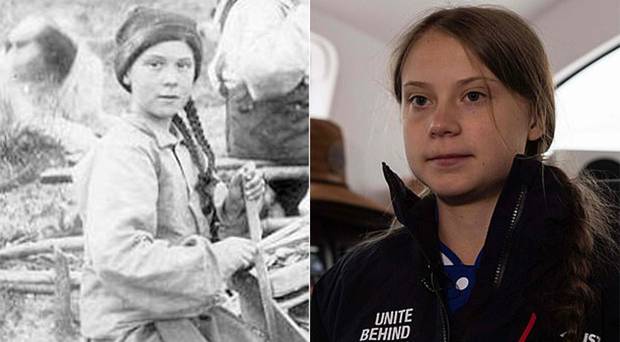 Conspiracy theorists have claimed Greta Thunberg is a time traveler “sent back to save us” with the 16-year-old looking eerily similar to a girl from a photo taken 121 years ago.

People throughout the world took to social media to share the photograph which shows three children operating a rocker at a gold mine in Canada in 1898.

In the foreground is a young girl who looks extremely similar to Thunberg, a climate change activist.

The image was recently found in the picture archives of the University of Washington.

While the likely explanation is that the pair are lookalikes, it hasn’t stopped the conspiracy theorists from scheming up their own thoughts.

One impressed person joked that the Swedish teenager had been “sent back to save us”.

“So ‘Greta Thunberg’ is in a photo from 120 years ago, and it’s my new favourite conspiracy,” he tweeted. “Greta’s a time traveller, from the future, and she’s here to save us.”

Another social media user quipped: “I’m not one for conspiracy theories but she is 100 per cent a time traveller.”

“Maybe she is from the future who was sent back in time to key moments in history to stop climate change.”

Another said: “What it is, right, is that actually she’s a time traveller, and she’s come to warn us about the future. It’s the only explanation.”

No, hun. What it is, right, is that actually she’s a time traveller, and she’s come to warn us about the future. It’s the only explanation.

Greta has become a symbol of a growing movement of young climate change activists after leading weekly school strikes in Sweden that inspired similar actions in around 100 cities worldwide.

She made headlines around the world after she gave members of the UN a grilling in a speech about climate change.

“How dare you pretend that this can be solved with just ‘business as usual’ and some technical solutions? With today’s emissions levels, that remaining CO2 budget will be entirely gone within less than eight and a half years.

“There will not be any solutions or plans presented in line with these figures here today, because these numbers are too uncomfortable. And you are still not mature enough to tell it like it is.

“You are failing us. But the young people are starting to understand your betrayal. The eyes of all future generations are upon you. And if you choose to fail us, I say: We will never forgive you.

“We will not let you get away with this. Right here, right now is where we draw the line. The world is waking up. And change is coming, whether you like it or not.”

WORLD NEWS: Coronavirus: Deaths will pass 50,000 in ‘the next few days’, WHO says

WORLD NEWS:- There have been conflicting accounts of the number of...