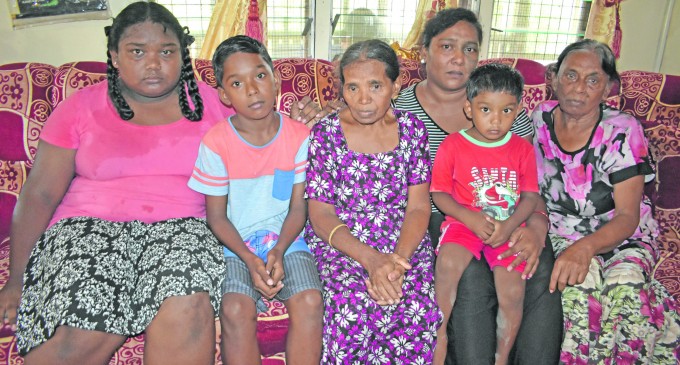 Updated: 7:51am – Moshmi Bai last spoke to her husband by phone at 2am Tuesday. Little did she know this would be the final time she would hear from him.

The body of Ms Bai’s husband, 46-year-old Bhan Pratap, was found between two containers at the Xclent Transport Fiji yard in Lautoka. He was said to be the sole breadwinner for their extended family.

“I don’t know how we can survive without him,” she told the News.

Describing her last conversation with him, Ms Bai said: “My husband called me at 2am and asked if I had served a good dinner for my brother, Ram Rao, who arrived from New Zealand over the weekend.

“I replied ‘yes’ and then he asked if the children were awake and if he could speak to them.

“I told him they were sleeping and to call early before they go to school,” Ms Bai said.

“He (Mr Pratap) then called and spoke to Viniyak.

“Viniyak said he was missing him and asked him to come home early,” Ms Bai said.

The mother of three was with her elderly mother (Adhi Lakshmi) and mother-in-law (Prabha Wati) at Vunivau, Labasa when she received the shocking news of Mr Pratap’s death.

Ms Bai said she did not no how to tell Viniyak that he would not get to see his father again.

“From the morning he has been asking me to make a phone call to Pratap so that he can talk to him,” the 41-year-old mother said.

“I didn’t know that my 17 years of marriage will come to an end this way.”

Mr Rao, Mr Pratap’s brother-in-law, said he had received a phone call from Xclent Transport Fiji where Mr Pratap had been working as a driver for four years informing him about what had happened.

According to the family, Mr Pratap was walking between two containers at the company yard in Lautoka, when he collapsed.

Two drivers were said to have had informed their employer about what happened and Police later arrived to investigate.

“I can’t believe within a span of few days my brother-in-law left us,” Mr Rao said.

“I arrived from New Zealand last weekend and spent Sunday night with him before he left for Lautoka around 3am on Monday.

“He promised me that he would return and have dinner together before I leave.”

Xclent Transport Fiji director Tarik Hussain confirmed that Mr Pratap was his employee and it was a sad incident.

“I am aware of the incident as informed by one of the drivers who was with him,” Mr Hussain.

“I have spoken to the family and will help them out.

“I have also informed my insurance company.

“He was my permanent staff member for four years and I will surely miss him.”

Mr Rao said the family planned to have the funeral on Friday.

Hunt for new LTA CEO to start next year