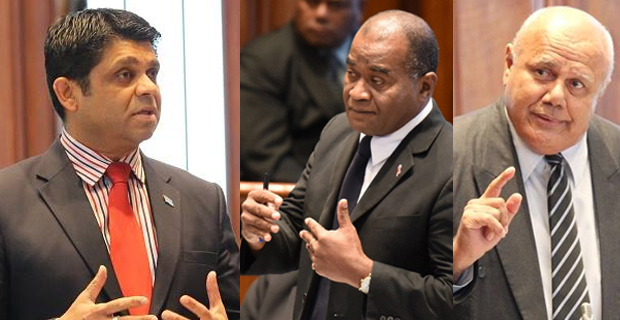 Update: 7:34 am – The opposition’s attempt to remove the $2.5 million allocated for Land Bank Investment in the 2017/2018 National Budget was thrown out of parliament yesterday.

SODELPA MP Niko Nawaikula moved a motion in parliament to remove the $2.5 million Land Bank Investment allocation as he said this will be the only way to end the Land Bank system.

SODELPA MP Viliame Gavoka also says that the Land Bank should be removed.

He says if the landowners were to lease their land through the iTaukei Land Trust Board, the land will also remain with them but TLTB will take away a certain percentage for administrative costs.

Sayed-Khaiyum says the Land Bank does not take any percentage from the lease to be given to the landowners.

He also highlighted that $1.8 million is allocated to the landowners in Legalega to develop 77 residential lots.

Sayed-Khaiyum says the $2.5 million Land Bank Investment is to assist the landowners to invest in their land so that they can get the maximum return from that.

He says the Prime Minister recently did the groundbreaking ceremony for the four land sub-divisions in Yadua, Saweni, Wairebetia and Vuda.

This is to help them to connect their land to utilities and the land still belongs to the landowners.

Sayed-Khaiyum says the landowners will get 100 percent of the money derived from their land.

He then went on to say that he hopes the landowners know that the SODELPA members who claim to be representing the iTaukei people are denying them the right to gain more money from it.

Meanwhile Agriculture Minister Inia Seruiratu also says that the land deposited in the Land Bank is getting more returns for the landowners.

FIJI NEWS:- Money Lenders are yet again under the spotlight

FTUC confident to secure a permit to march to support suspended...